This past year was a very visible one for Deaf Culture and American Sign Language. From viral videos to late night TV appearances, mainstream audiences just couldn’t get enough of Deaf superstars or their fascinating visual language. As we leave 2014, let’s take a look back at some of the most memorable Deaf pop culture moments of this year, and hope that 2015 brings even more awareness! 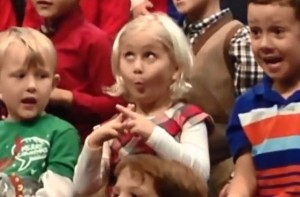 Okay, technically this happened in December 2013, but it’s so cute I couldn’t leave it out! Kindergartener Claire Koch decided to use ASL at her school holiday concert to make sure her Deaf family members could enjoy the performance, and it was adorable. So adorable, that the video her mother posted went viral with over 8 million views to date! 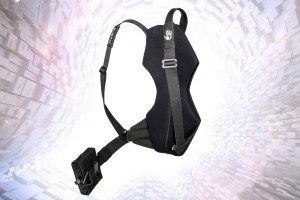 Each year, new technologies emerge which attempt to simplify and improve the lives of deaf individuals. A number of companies are working on different sign-to-speech translation solutions; while others are taking creative approaches to speech-to-text. One of my favorite ideas of 2014 is the StudioFeed music backpack, which turns music into a full body experience. 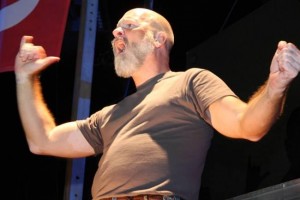 Deaf interpreter David Cowan is a known favorite among Deaf LBGT individuals for his expressive and appropriately flamboyant work each year at Atlanta PRIDE. Across the country, PRIDE festivals tout themselves as all-inclusive events. Hiring a Deaf Interpreter that deaf/HoH audiences adore is a beautiful example of equality. 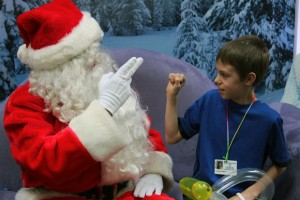 From mall Santas to baseball mascots— the people behind the characters have been doing their diversity homework! This year, there were a number of heartwarming stories and videos featuring deaf children who are overjoyed to discover that their favorite characters can communicate with them using ASL. Learning even a few simple phrases can help deaf kids feel included! 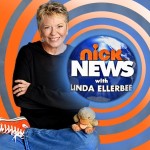 16. “Now Hear This” Premiers on Nickelodeon

It was pretty inspiring to see a children’s television network take a genuine interest in Deaf Culture. This Nick News special focused on the lives of several deaf young people across the country, and showcased how there are many different ways to be a deaf person in a hearing world. 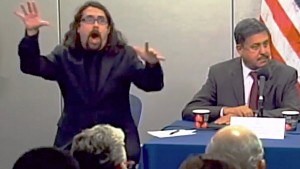 As Mayor Bill de Blasio delivered critical information to the citizens of New York regarding the Ebola virus, Deaf Interpreter Jonathan Lamberton addressed the deaf population. Many hearing individuals were fascinated by Lamberton’s dramatic signing style, as it was the first time they had ever seen a Deaf Interpreter in action. 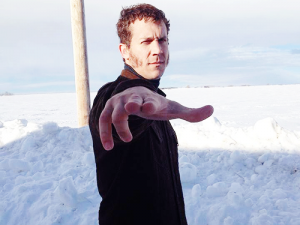 When creating characters for the FX series Fargo (based on the Coen brother’s film), the show’s creators decided to stray from the usual formula by writing a deaf character into the story. The character, played by actor Russell Harvard, is not included in the show to address deaf issues or explore Deaf culture; he is simply a normal character who happens to be deaf. Hopefully other programs will follow suit, as there are many talented deaf actors out there and all audiences deserve to see more diversity on screen! 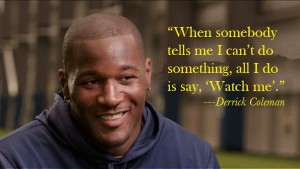 Seattle Seahawks player Derrick Coleman gained superstar status not only for his impressive athleticism, but because he proved that deafness does not have to be a barrier in professional sports. Coaches and scouts have taken note, and are now offering more deaf athletes the opportunities they deserve. 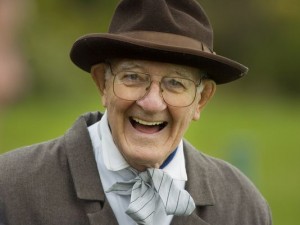 Legendary Phyllis Frelich was the inspiration for, and the original star of, “Children of a Lesser God,” a revolutionary piece which introduced audiences to a complex, nuanced deaf character in a lead role. It won a Tony award for best play, and was later adapted into a film which won Marlee Matlin an Oscar. Frelich passed away this year, but her groundbreaking work has inspired and paved the way for generations of deaf performers to come.
In 2014, we also lost professor, writer, and poet Robert Panara. Panara helped translate classic works of literature into ASL, and was instrumental in the establishment of deaf studies higher education curriculum. 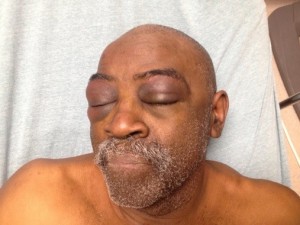 The tragic and deplorable treatment of deaf/HoH individuals by the criminal justice system is finally being exposed, thanks to the information age. Stories about deaf people being beaten by cops, wrongfully convicted, and abused in jail were widely read and shared across the internet; leading to an increase in awareness and outrage. While this is not exactly a victory, and certainly not cause for celebration, it has provided visibility to a very real problem and strengthened advocacy efforts. 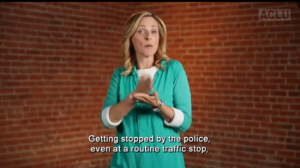 10. Marlee Matlin partners with ACLU and HEARD for #KnowYourRights videos:

To help deaf citizens better understand and protect their legal rights, award-winning Deaf actress Marlee Matlin teamed up with the American Civil Liberties Union and Helping Educate to Advance the Rights of the Deaf to create a series of videos. The videos represent a larger movement within the Deaf community for self-empowerment through education. The internet amplifies the power of minority voices, exposes injustice, and provides resources for assertive self advocacy! 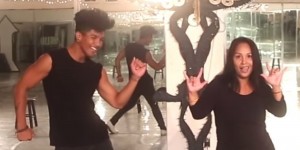 9. Professional Dancer and His Deaf Mother Prove Music is for EVERYONE!

Mark Villaver, a hearing dancer, and his Deaf mother share their love of music and dancing in one of the most FUN videos of 2014! Some people mistakenly think deaf people can’t enjoy music. This couldn’t be further from the truth! 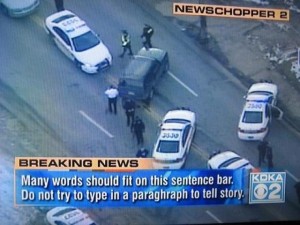 8. FCC Cracks Down on Captioning:

The internet has come to the forefront of the entertainment industry. Unfortunately, closed captioning was often neglected when providers made the technology leap; leaving deaf individuals without online access to programming. In 2014 deadlines were set which require providers to caption all shows and video clips, and guidelines were established to guarantee the quality of captions. Over the next few years, we will see all major video content providers moving toward accessibility. Additionally, airlines and other places of public accommodation are feeling increased pressure to provide equal access for deaf patrons.

After a lengthy court battle, it was determined that devoted deaf med students have the same right to attend medical school as hearing students. We call this a 2014 victory. Hopefully this will lead to more hardworking deaf young people pursuing careers in the medical field. 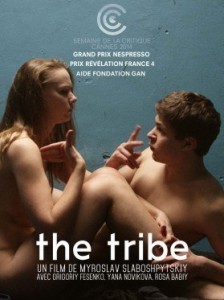 6. “The Tribe” Indie Film About Deaf Students Wins Over Critics:

The film, which is all sign language without subtitles, was critically acclaimed at Cannes and has won a number of prestigious awards. The lack of captions serves to alienate hearing viewers– who are accustomed to the privilege of communication access– yet the film is engaging enough to keep all audiences along for the ride.

This fun concept for a restaurant creates a comfortable place for deaf diners; provides jobs for deaf food industry workers; and helps hearing people get a “taste” of what it’s like to be on the other side of the language barrier. The success of this endeavor may open the door for future deaf-focused businesses.

On August 8, 2014 the FCC adopted an order requiring wireless carriers and other text messaging providers to deliver emergency texts to 911 call centers. Equal access to emergency services was long overdue! 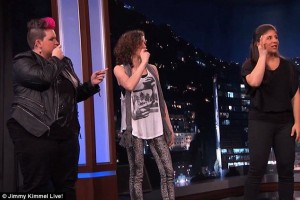 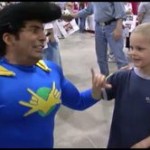 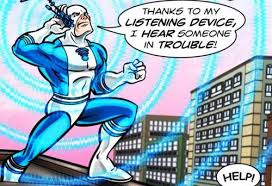 with very few deviations from the norm. In 2014, we saw diversity creeping into the fantasy world of good and evil when audiences were introduced to Deaf superheroes like Blue Ear and Superdeafy. These fictional heroes provide real life role models for Deaf children, demonstrating that deafness is only a minor obstacle to overcome on the way to greatness. 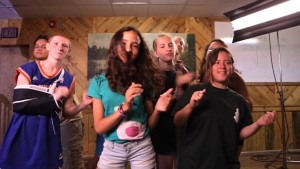 If you haven’t seen this amazing upbeat video online, you must be living under a rock! Camp Mark Seven Deaf Film Camp  nearly broke the internet with their cheerful ASL rendition of Pharrell Williams smash hit “Happy.” Camp Mark Seven teaches young deaf filmmakers how to write, direct, and produce their own films; which helps integrate more deaf voices in pop culture and Hollywood. The video has millions of views online and made people all across America stop and smile. Haven’t seen it?Well what are you waiting for… Get Happy !

2014 was an impressive year for deafness in the media, and these are only a few of the many pop culture moments! Of course we still have a long way to go, but when Deaf Culture becomes more visible, Deaf issues start getting the attention they deserve. By amplifying the voices of the community, and highlighting the accomplishments of deaf individuals, we can help the world see that deafness is not a barrier– merely a small obstacle on the way to greatness!

Have a safe and happy New Year!

If you are interested in learning about Deaf culture and American Sign Language, I have extended a special deal on ASL training. From now until JANUARY 7, schedule 3 personal ASL lessons for only $150. Learn on your own time, at your own convenience. We can meet in person in NYC or via video chat. No matter what level your skills are, from beginner to fluency, we can work together to discover the beautiful silent world of ASL!