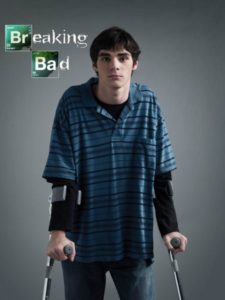 Under mounting pressure from a wide variety of demographics who feel underrepresented in film and television, the entertainment industry is finally beginning to show signs of diversity. It is important to recognize that this gradual movement toward a multicultural media is only the result of long and tiresome grassroots efforts. The fight for representation touches people from all cultural minority groups, and intersects in a powerful way. Here, we do not see change coming from the top down, but rather from the bottom up — we, the people, are dictating what the future of film and television will look like.

Considering National Association for the Deaf (NAD) is the oldest civil rights organization in the United States, it’s easy to see that the American Deaf community has long been involved with the fight for social justice. In film and television, specifically, there have been a number of highly influential Deaf actors who have left lasting impacts on audiences of all ability. One of the most well-known examples is Linda Bove, who exposed many generations of children to deafness and ASL during her 30 year role as Linda the Librarian on public television’s Sesame Street. 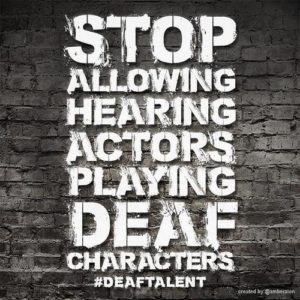 Over the past two years, the Deaf community has been actively pushing for greater cultural awareness through the #DeafTalent movement. #DeafTalent was started as a way for actors, performers, and directors who are deaf to push back against an industry that continuously hires hearing individuals when a deaf individual would be a much more appropriate choice. Why cast a hearing actor to play a deaf role? Why hire a hearing director to offer a deaf perspective? There are plenty of exceptionally talented deaf individuals seeking exactly this type of work, who would truly enrich any creative project.

The existence of #DeafTalent effectively removes any excuse people might have for culturally negligent hiring. Popularized by director Jules Dameron, the hashtag and social media presence has become one way to connect casting directors, investors, and so on with the deaf community. It shines a very clear spotlight on the problems in the industry and Dameron, herself, even offers up solutions on how to create true diversity in film and TV. 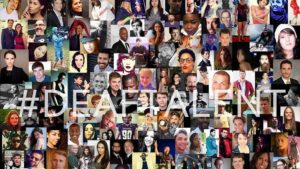 “Much of our inspiration today built on previous movements such as the historic 1988 Deaf President Now (DPN) movement at Gallaudet University which led to the passage of the ADA bill in 1990,” Charmaine Hlibok, Director of Fundraising at Mark Seven Deaf Foundation explains. “DPN will celebrate its 30th anniversary next March, and today’s deaf children have many more opportunities today than many of us had.”

Without constant labor from advocacy groups, mainstream film and TV would probably never deviate from reinforcing the white, cisgendered, able-bodied, heterosexual male perspective as status quo. Like other minority groups, people who are d/Deaf/HoH couldn’t just wait around expecting Hollywood to change. For generations, performers, writers, directors, and filmmakers have been creating their own inclusive artistic communities, laying the foundation for the success of the activist efforts of today. 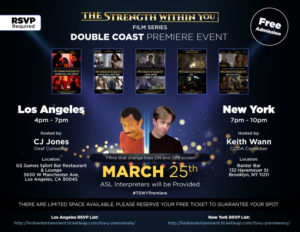 Set to make a bicostal debut on Saturday, March 25 with premier events in both Los Angeles and New York City, The Strength Within You short film series is the first, and certainly not the last, of its kind. Inspired greatly by the #DeafTalent movement, The Strength Within You series features an exciting roster of Deaf talent in each of five films (both in front of and behind the camera). The film project was coordinated by filmmaker and producer Katia Belas as a way to explore various social issues and taboos— from domestic violence to LGBTQ rights— through a slightly different lens than audiences are used to seeing.

After being away from the film industry for 13 years, Belas, who is a Brazilian immigrant, found it impossible to make a career. “People looked down at me and would see only an old stupid, no-talent, no-vision, no-good-for-anything person.” Belas found herself working internships so she could learn how to utilize the new methods of media distribution that had come about during her hiatus. Like so many others trying to break through in the film and TV industry, she quietly endured instances of discrimination while networking and developing her craft. Finally, one day, she saw a film that opened her eyes to an alternative. Instead of waiting for an opportunity to make an impact, she had to create that opportunity herself! 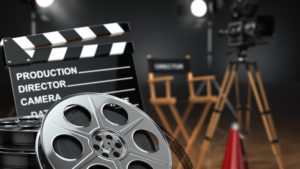 “It was a very short 1:54 minute silent film (almost a PSA) done by 2 amazing Deaf talents called ‘CIG.’ I saw it and thought: that is what I will do for me, and for people who, like me, are also seen as the ‘stupid, no-talent, no-good for anything’ in this world,” Belas explains. “Being involved with Deaf people for 3 years, I had already decided that my main goal when working in the industry was to work with Deaf Talents. So I just put 2 and 2 together, and came up with the idea to make this series.”

“It is a series of empowering, uplifting, humanity messages created by a team of Deaf and hearing filmmakers,” continues Belas. “Short films done with Deaf talents, proving to the world that we (Deaf, immigrants, older people) have talents, we are not stupid, and we can do anything regardless of anything, age, disability, language.”

Filmmaker Jade Bryan has been working for more than a decade to, as she explains it, “increase positive representation of Deaf People of Color in television and film.” Bryan’s more recent projects, If You Could Hear My Own Tune and The Shattered Mind have made extensive rounds on the festival circuits, winning numerous awards. She is currently working on an exciting new documentary series, alongside deaf actress and producer Maleni Chaitoo, titled #RESIST Through Our Eyes. 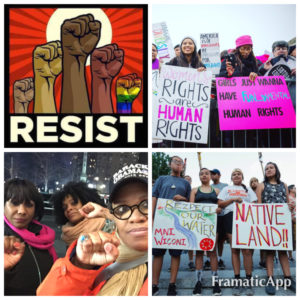 According to the project’s active Fundraising Page #RESIST Through Our Eyes will be an 8-part documentary series “which will follow and document Deaf and Hard of Hearing people’s personal experiences and concerns when their human and civil rights are violated, challenged and threatened in the current political climate of chaos, toxicity, propaganda, “alternative facts” and uncertainty that exist under a regime Administration. We will meet and interview Deaf and Hard of Hearing individuals whose Constitutional Rights have being threatened or violated… this includes activists, advocators, educators, lawyers, interpreters, Human and Civil Rights agencies and organizations, and their allies.”

Bryan sees intersectionality as the future of media. “Diversity does not necessarily means inclusive because they do not always include ‘the others.’ What do I mean by other? Deaf talents of color, people with other disabilities,” she explains. “As of today, 2017, the entertainment and television industry do not see us as an equal part of society. We’re always kept on sidelines or ignored… We have so much story to tell. Why are we as intersectional, the disabled and black deaf talents, being overlooked? Although I promote inclusion and deaf talents of color, we must be careful of erasing anyone. There are so many of us who are ready to tell our stories.”

With the rise of the internet, which offers opportunity for visibility and a public platform, people who are d/Deaf/HoH have been actively correcting wrong assumptions, smashing stereotypes, and working to dismantle the structural barriers that oppress entire groups of people due to the way they are born and/or they way they choose to communicate. Members of the majority culture are now getting exposed to all different aspects of deafness and Deaf culture through intersectional social justice dialogues and deaf-created content. People are seeing, perhaps for the first time, that people who are deaf are mostly just regular everyday human beings who want the same kind of happiness and success as everyone else, and that they can do pretty much all the same things hearing people can do— except for hear. 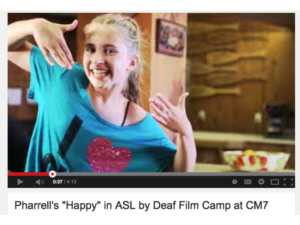 At the very roots of all grassroots movements are the younger generations. Working to ensure a future where d/Deaf/HoH children grow up confident in their ability to pursue their creative dreams without limitations, CampMark7 Deaf Film Camp is now in its fifth year of working with aspiring filmmakers ages 13-16 in Old Forge, NY to learn the ins and outs of the process— from script writing to screening. Campers are given the equipment, software, and guidance they need to turn their ideas into reality in a fast-paced, yet supportive hands-on filmmaking program. Several of the deaf campers’ final films have even gone viral— the ASL music video they made for Pharrell’s “Happy” has more than 1.7 million views on YouTube at this time!
“The Deaf Film Camp is a huge success because they work directly with skilled deaf role models and campers have direct communication access to their teachers,” Hlibok explains of CampMark7. “The Lights Camera Access! 2.0, the National Disability Mentorship Coalition, PolicyWorks, and many others support our mission and collaborate with us on various outreach projects. We host summits in NYC, DC and Los Angeles during the year for students who wish to meet mentors and meet with role models in the media industry who can provide opportunities to find internships or careers in their respective fields.” 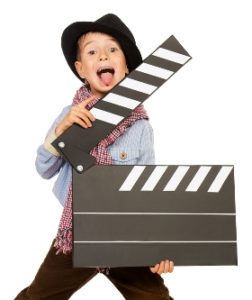 As an accessible, inclusive, and immersive program, CampMark7 fosters the innate potentials of young people who might otherwise encounter discouraging limitations. Deaf/HoH youth deserve more music and arts programs that enrich their lives and facilitate a deeper, reciprocal connection to the cultural arts. Supporting organizations that work with young people is easy, for example the Deaf Film Camp Showcase Event on March 25 at Lexington School for the Deaf in Queens, NY will help raise funds for 2017 camper tuitions. For those who struggle with communication on a regular basis, creative outlets such as film, writing, art, or music, can provide a much needed avenue for healthy self-expression and building self-confidence.

“Human difference is a strength for all of us when we can teach and learn together,” Hlibok continues. “America has struggled with this in the past, and we are making progress towards correcting injustices every day. This is among the reasons why diversity is so important in film & TV.”

As the DeafTalent movement continues to spread, influencing the very fabric of American pop culture, creative people who are deaf will build further upon these grassroots efforts. The larger intersectional discourse with regards to how the media portrays people from minority communities is bringing many advocacy groups together, thus raising the visibility of marginalized people seeking work in the industry. Awareness about the importance and availability of deaf perspectives only increases as skilled actors, writers, directors, camera people, and consultants are gradually making their way onto major production teams and on-screen roles.