In schools across the country, American Sign Language is offered as a foreign language. Why is a language which is used by around 500,000 native U.S. citizens taught as foreign? Great question. When we take a look at the prejudices facing Deaf culture, I think this is a good place to start.

When ASL gets labeled “foreign,” we paint a picture where signed communication is automatically inferior. It carries the implication that deaf individuals who use ASL are second class citizens in their own country, and that the only way to be a U.S. citizen is to defer to spoken English. This breaks my heart. No wonder the mainstream population remains so uninformed on Deaf culture– it isn’t clear that Deaf people can be American at all!

The discussions which followed Hurricane Sandy really threw me for a loop. It was surprising to learn how many hearing people had never even tried interacting with a deaf person. I suppose I always took for granted that, as a Child of Deaf Adults (CODA), I was blessed with the opportunity to participate in both the deaf and hearing worlds. Once my signing style (which is perfectly normal to those who use ASL) became an internet attraction, I was forced to fully recognize the lack of awareness that exists. 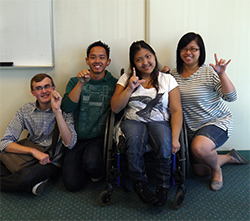 America may be progressive, but the majority culture remains dominant. Equality is still treated as a privilege, not a right. I’ve come to believe that public education is our most powerful tool for overcoming institutionalized prejudice. If the children of our multicultural country were properly schooled in diversity from a young age, they would develop the innate understanding that our human differences do not affect our equal status. It’s not enough to teach kids that diversity exists, they should be immersed in the cultural histories and social struggles of each minority subset.  This applies not only for deafness, but the multitude of identities that make our nation great.

If kids reach high school graduation without understanding the adversity facing autistic Americans, Chinese Americans, or Deaf Americans, they have learned very little about their own society. If children have not read books from African American, female, and Muslim American authors, they are missing out on extremely valuable perspectives. Incorporating a thorough multicultural aspect to existing social studies curriculums would strengthen our national identity, and help us become the land of equal opportunity we always meant to be.